Odyssey of the Great Dream 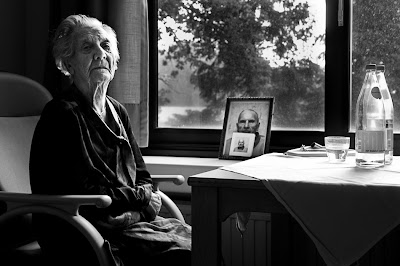 (Living in the home —  © Esveaa)
Poetry Daily (http://poems.com/) is an "anthology of contemporary poetry" that each day publishes a new poem culled from a variety of sources. This past November 24th, their featured journal was the Sewanee Review (http://www.sewanee.edu/sewanee_review), from which they drew this wrenching and powerful poem by R.T. Smith.

When Odysseus descended to the underworld
and crossed the dark river to learn the key
to his destiny, he poured the ritual milk and honey,
the wine and barley and blood to summon the dead,
but he never expected to find his mother among
the shadows who were filled with mist and sifted
with the wind which had no source. He had thought
her alive and back in Ithaca expecting his return.
He had assumed the worst ordeals were his own.
But, when he reached out, shivering as he wept,
to embrace the ghost, that wanderer found
no substance, no flesh nor blood nor bone,
and he must have felt as I did that first time home
when my mother's mind had begun to wander
and she disremembered not only the laughter,
the lightning-struck chinaberry, the sunset
peaches and fireflies and the sharp smell
of catfish frying, but also her name and the fact
that she was sitting in her kitchen of fifty years
beside my father who stood there straining
not to wring his hands or surrender to the tears
welling around his eyes. She gathered her purse,
her hat and wrap, then said, Please drive me home
before strangers take every damned thing I own.
Her eyes glaucous with terror, she was exhausted
and desperate, almost herself, "an empty, flitting
shade," as Homer says it, uncertain in her haze
whether she was moving toward or away
from what might be called the Great Dream.
When she sobbed and cried, Where is my son?,
I, too, felt bewildered, and not even a seer
from the land of night and frost and smoke
could tell me what words would amount
to comfort, nor which constellation to steer by,
nor where all this heart-sorrow might end.
Posted by Lorenzo — Alchemist's Pillow at 12:36 AM