To paint the speed of light ... 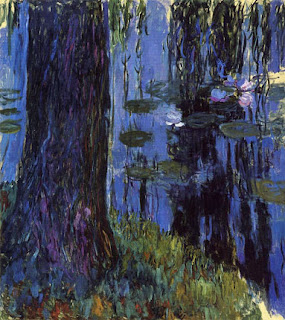 For me, one of the most moving wonders of Claude Monet's art was his valiant struggle to continue painting despite severe vision problems that brought him to the brink of blindness late in his life.

From around 1905 to 1923, his cataracts worsened, greatly affecting how he saw colors, light, the boundaries of objects. This had great impact on his work. By 1922 he was nearly blind and had to stop painting, before having one of his eyes operated on in 1923. He declined to go ahead with surgery on the other eye, but did resume painting and continued to work until a few months before his death in 1926. For a fuller discussion of how these problems affected his vision and painting, I recommend the article "The Blurry World of Claude Monet Recreated" on the Live Science website.

I mention this as an introduction to the stirring poem "Monet Refuses the Operation", in which the poet Lisa Mueller imagines Monet explaining to the doctor why he will not undergo further surgery. I read and heard this on the Chicago Poetry Tour available at the Poetry Foundation website.

Doctor, you say there are no haloes
around the streetlights in Paris
and what I see is an aberration
caused by old age, an affliction.
I tell you it has taken me all my life
to arrive at the vision of gas lamps as angels,
to soften and blur and finally banish
the edges you regret I don’t see,
to learn that the line I called the horizon
does not exist and sky and water,
so long apart, are the same state of being.
Fifty-four years before I could see
Rouen cathedral is built
of parallel shafts of sun,
and now you want to restore
my youthful errors: fixed
notions of top and bottom,
the illusion of three-dimensional space,
wisteria separate
from the bridge it covers.
What can I say to convince you
the Houses of Parliament dissolve
night after night to become
the fluid dream of the Thames?
I will not return to a universe
of objects that don’t know each other,
as if islands were not the lost children
of one great continent. The world
is flux, and light becomes what it touches,
becomes water, lilies on water,
above and below water,
becomes lilac and mauve and yellow
and white and cerulean lamps,
small fists passing sunlight
so quickly to one another
that it would take long, streaming hair
inside my brush to catch it.
To paint the speed of light!
Our weighted shapes, these verticals,
burn to mix with air
and changes our bones, skin, clothes
to gases. Doctor,
if only you could see
how heaven pulls earth into its arms
and how infinitely the heart expands
to claim this world, blue vapor without end.

For more information on Lisa Mueller see the brief biography elsewhere on the Poetry Foundation site. The photos of the paintings are from Monetalia, an excellent website on all things Monet. 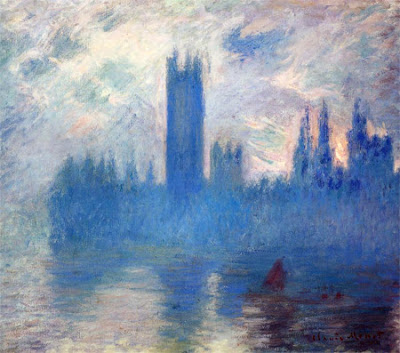