From gossamer wings to bellowed angst 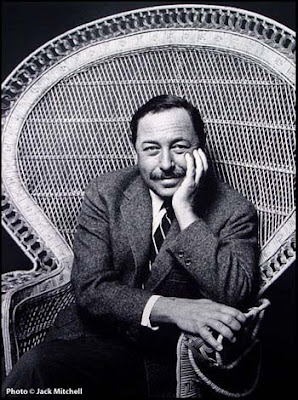 I do not know if by coincidence (no mention is made of the anniversary) but today’s New York Times (http://theater.nytimes.com/2009/12/03/theater/reviews/03streetcar.html?hpw) carries a review by Ben Brantley of the new production of Streetcar, directed by Liv Ullman, and now running at the Brooklyn Academy of Music’s Harvey Theater through December 20th. Brantley calls it a ‘heart-stopping production’, largely on the strength of Cate Blanchett’s performance as Blanche DuBois, saying the Australian actress “soars spectacularly on the gossamer wings of fantasies that allow her character to live with herself”.

The review is one of the most glowing I’ve seen in some time, especially of Ms. Blanchett, and I’ll quote Mr. Brantley at length. He briefly recalls other stage versions of the Blanche character to frame his discussion of what Cate Blanchett has brought to the role:


Most interpretations I’ve seen of Blanche, Tennessee Williams’s greatest contribution to dramatic portraiture, ride the glistening surface of the character’s poetry, turning Blanche into a lyric, fading butterfly waiting for the net to descend.


What Ms. Blanchett brings to the character is life itself, a primal survival instinct that keeps her on her feet long after she has been buffeted by blows that would level a heavyweight boxer.


Yet there’s a see-sawing between strength and fragility in Blanche, and too often those who play her fall irrevocably onto one side or another.


All the baggage that any “Streetcar” usually travels with has been jettisoned. Ms. Ullmann and Ms. Blanchett have performed the play as if it had never been staged before, with the result that, as a friend of mine put it, “you feel like you’re hearing words you thought you knew pronounced correctly for the first time.”


Followed by an interesting observation on the different perspective possibly provided on this icon of American culture by two “outsiders”:

This newly lucid production of a quintessentially American play comes to us via a Norwegian director, best known as an actress in the brooding Swedish films of Ingmar Bergman, and an Australian movie star, famous for impersonating historical figures like Elizabeth I and Katharine Hepburn. Blessed perhaps with an outsider’s distance on an American cultural monument, Ms. Ullmann and Ms. Blanchett have, first of all, restored Blanche to the center of “Streetcar.”


Ever since Brando set Broadway abuzz in the original stage production in 1947, Stanley — the young, ruthless sexual animal who is married to Blanche’s sister, Stella — has usually been presented as Blanche’s equal, in terms of both thematic import and star presence. But Ms. Ullmann’s production makes it clear that in “Streetcar” it is Blanche who evolves, struggles and falls as heroes classically have.


This Blanche is no passive victim. She knows herself painfully well, which makes her both funnier and sadder than most Blanches. Always, though, we are aware of her knowing that standing up and staying sane are merely provisional; she could topple over at any second. That delicate balance assumes its most wrenching form in her climactic face-off with Stanley, as Blanche tries to defy not only her predatory brother-in-law but also the drunkenness that keeps pulling her to the floor. Gravity is not on her side.


No one, of course, is lonelier than Blanche, and her valiant battle against that condition lends this “Streetcar” a poignancy that, by the end, slides into full pathos. Our last vision of this Blanche is, like our first, of a ghost, if by ghost we mean someone defeated by life. But an image of warmth remains, like the afterglow of an extinguished flame, of the life poured into one woman’s last stand against a fate that is uniquely her own and somehow ours as well.


Garrison Keillor, on the other hand, does note the anniversary of Streetcar’s Broadway premiere (as well as Joseph Conrad’s birthday). At his Writer’s Almanac site (http://writersalmanac.publicradio.org/), Keillor discusses the play and some of the pressures faced in making a movie out of what was then considered a shocking display of “sexuality and sexual violence onstage”.

And he ends with what strikes me as hilarious anecdote about an annual literary festival dedicated to Tennessee Williams:

Every spring in New Orleans, there is a Tennessee Williams/New Orleans Literary Festival, which next year will take place on March 24–28. The Festival features panels, readings, music, acting competitions, writing workshops, and the final and most famous event of this particular literary festival: the "Stella shouting contest," also known as the "Stell-off." In this competition, participants get a chance to imitate Marlon Brando in his famous scene where he passionately yells "Stelllllaaaaa!" from beneath his wife's window, begging her to return to him after he has beaten her. A few women participate in the shouting contest, some of them shouting "Stanley" instead of "Stella," but mostly the contestant are men. They have to bellow "Stella" (or "Stanley") three times, and there are points for how loud the shouting is but also for how angsty and passionate, how true to Marlon Brando. Many men outfit themselves in a white tank top like Brando wore in the play.


All I can say is that I trust the ‘Stell-off’ is the decibel, but decidedly not the literary, highpoint of the gathering.

Well, not sure how I got from Cate Blanchett soaring spectacularly on gossamer wings to wannabe Stanley Kowalski Brandos bellowing angst and passion, but it’s been good fun. Which is what you can usually have if you visit The Writer’s Almanac site. An added plus is the daily podcast where you can hear Garrison Keillor reading the day’s featured poem and spinning a yarn or two.
Posted by Lorenzo — Alchemist's Pillow at 8:05 PM