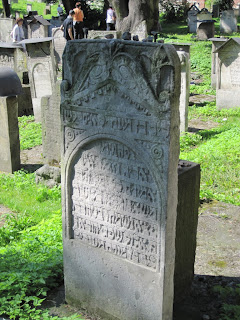 One of the many rewarding moments on my trip to the lovely and enthralling city of Krakow this summer was an unplanned visit to the Remuh synagogue and its Renaissance-age cemetery. Founded nearly 500 years ago in the 1550s and used until the end of the 18th century, the cemetery has a remarkable collection of  centuries-old stelae, headstones and stone coffins discovered during conservation works. It is surrounded by an outer wall built largely out of unmatched pieces of incomplete gravestones.

The site is located in Kazimierz, the old Jewish quarter of the city, very close to the hotel where we were staying, so María and I decided to go with our daughters one morning. As it turned out, later that day we would visit Auschwitz, where, for reasons both hideous and obvious, there are no tombs or graves. So, though unintended at the time, the trip to this graveyard would in retrospect seem fitting and proper, a moment to visit and pay our respects to the ancestors of some of the so many who perished at the death camp.

While strolling amongst the gravestones, I was struck by a custom I had never seen before: visitors would place small stones on top of the tombstones and stelae. The inscriptions on the stones are largely etched in Hebrew and many are badly faded, so I had no idea who was in the graves we were filing past, whether man, woman or child, or in what year or century they had died. Nevertheless, I instinctively felt moved to search the ground for the right pebble and place it atop one of the tombstones, joining in a rite whose meaning was unknown to me, yet at the same time familiar, perhaps in much the same way that most ancient secrets are... 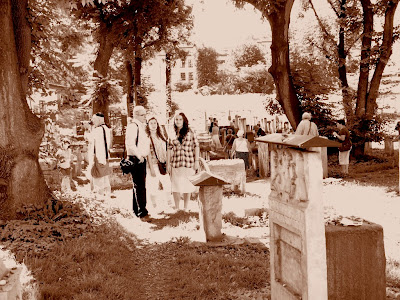 My bare Christian head
capped by a yarmulke,

I stand before
the undecipherable.

and listen to its ancient tongue,
swallowed whole but still wagging.

Stones that clink like flint chalices,
vessels of mute blessings,

in each stone a word embalmed
(in the beginning was the word).

in the sliver of space between
molten lead and frozen mercury.

My own pebble is hewed
from poems I never learned

but have always known
yet fear I will not sing.

before I perch it atop
the roof of this tilting stela,

above illegible words
chiseled in a language

I will only know
the day I meet

the stranger who today
for some reason

has chosen me
to remember him

in this petrified choir
on this verdant morning. 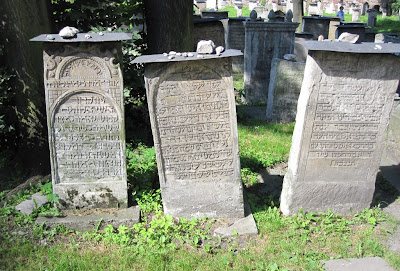 Written for Tess Kincaid's Magpie ﻿Tales prompt for this week. Click on this link to see the other magpies.
Posted by Lorenzo — Alchemist's Pillow at 9:04 AM