Take your fill and filaments of ambrosia ... 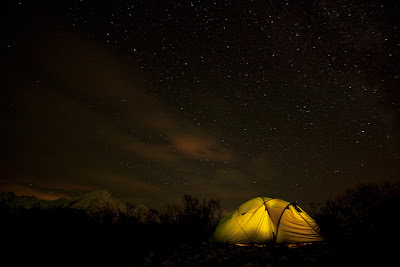 Photo: The Second You Sleep by Magnus Nysveen at Onexposure.

I know that I am mortal and the creature of a day; but when I search out the massed wheeling circles of the stars, my feet no longer touch the Earth, but, side by side with Zeus himself, I take my fill of ambrosia, the food of the gods. — Claudius Ptolemy

Attention all stargazers, for your daily nightly fill of celestial ambrosia, I recommend the NASA sponsored Astronomy Picture of the Day (APOD). The site runs a different image every day, with a paragraph of illuminating commentary by a professional astronomer, featuring loads of links to fuller more detailed explanations of everything from the science of stardust, supernovas and pulsars to how events in the night sky have shaped human history and impact mythology and art, although it is far heavier on the science than on the art. The images and photographs are usually of striking quality, and you can download very high definition copies.

A good example from some months ago was the following image taken by the Hubble space telescope of the Crab Nebula and its mysterious filaments (APOD October 25, 2009): 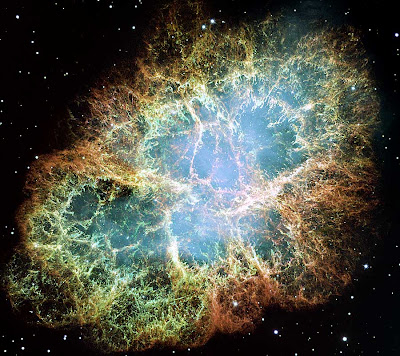 It was accompanied by the following explanation:


This is the mess that is left when a star explodes. The Crab Nebula, the result of a supernova seen in 1054 AD, is filled with mysterious filaments. The filaments are not only tremendously complex, but appear to have less mass than expelled in the original supernova and a higher speed than expected from a free explosion. The above image, taken by the Hubble Space Telescope, is presented in three colors chosen for scientific interest. The Crab Nebula spans about 10 light-years. In the nebula's very center lies a pulsar: a neutron star as massive as the Sun but with only the size of a small town. The Crab Pulsar rotates about 30 times each second.


On the APOD site the above paragraph contained 15 links or so, which I am too lazy to reproduce here. For example, clicking on mysterious in “mysterious filaments” brings up the following film-animation version released by NASA and the European Space Agency of the supernova explosion that left this beautiful “mess”. 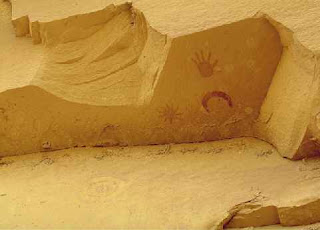 And clicking on "1054 AD", takes you to a discussion of why the accompanying image (as photographed by Ron Lussier) is thought to be a petroglyph made by Anasazi Indian artists (in present-day Arizona and New Mexico) depicting the supernova which produced the great Crab Nebula, which shone four times as intensely as Venus at its brightest and could be seen in daylight for 23 straight days.