Of unstilted youth and gracious age ...

A few posts ago, I recalled how Proust likened aging to walking on living stilts that keep on growing — the view improves, but everything begins to wobble. I find this notion of the heightened vantage point and perception that comes with our mature years, disquietingly accompanied by awareness of our own mortality, to be strikingly expressed in the following poem. 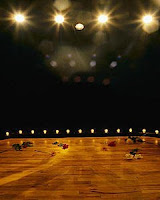 I WILL NEVER BE YOUNG AGAIN

That life was a serious affair
only later one becomes aware
– like all youth, I came onstage
to take life by storm

I would leave my mark
And strut away amid applause
– aging, dying, were but
the dimensions of the theater 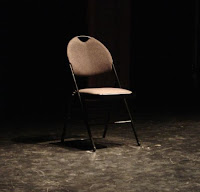 But time has shrunk behind me now
and the unpleasant truth emerges:
ageing, dying
is the lone plot in this show


For those of you who can read Spanish, you will certainly prefer the original over the translation (mine). I include them both side by side: 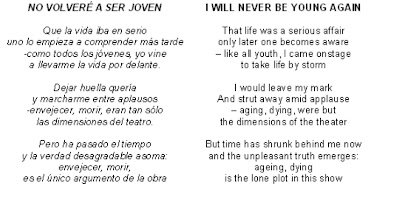 For more of his work (in Spanish only), I recommend the A media voz site, where you can read and hear many of his poems. 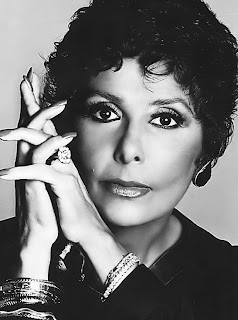 But I certainly do not want to end this post on a down note, lamenting the merciless passage of time. The way we carry this growing knowledge and intimacy with our final destiny need not be a call to morbid self-pity. There is a triumph of sorts to be wrested from this demise.

Take the graceful example of Lena Horne. I will not go into her biography, there are better sources out there for the details of youthful beauty and deep talent, of how she had to overcome the stupidest of obstacles placed in her path by petty and bigoted minds. The best would be to see the recording of her 1981 Broadway show "Lena: The Lady and her Music".

Originally scheduled to run four weeks, the show was a huge success and ran for more than a year, closing on her 65th birthday on June 30, 1982. Thankfully, a few days later, the entire show was performed again and recorded. Below you can see and hear her stirring version of "Yesterday, When I was Young".

Take in how her voice lingers with the breeze on the candle flame and see if you can dodge the sparks that fly from the flint in her throat when she hits the words "arrogance and pride". I'm posting the full lyrics below the video.


Yesterday, when I was young, 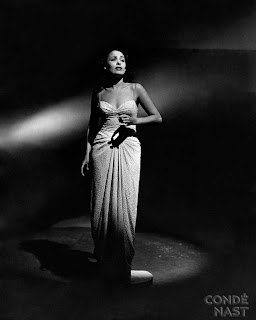 The taste of life was sweet, as rain upon my tongue,
I teased at life, as if it were a foolish game,
The way the evening breeze may tease a candle flame

The thousand dreams I dreamed, the splendid things I planned,
I always built, alas, on weak and shifting sand,
I lived by night, and shunned the naked light of day,
And only now, I see, how the years ran away

Yesterday, when I was young,
So many happy songs were waiting to be sung,
So many wild pleasures lay in store for me,
And so much pain, my dazzled eyes refused to see

I ran so fast that time, and youth at last ran out,
I never stopped to think, what life, was all about,
And every conversation, I can now recall,
Concerned itself with me, and nothing else at all

Yesterday, the moon was blue,
And every crazy day, brought something new to do,
I used my magic age, as if it were a wand,
And never saw the worst, and the emptiness beyond 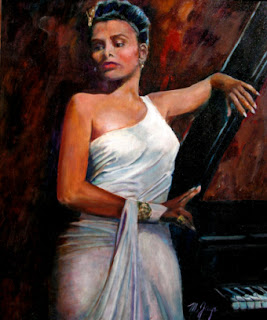 The game of love I played, with arrogance and pride,

And every flame I lit, too quickly, quickly died,
The friends I made, all seemed somehow to drift away,
And only I am left, on stage to end the play

There are so many songs in me, that won't be sung,
I feel the bitter taste, of tears upon my tongue,
The time has come for me to pay,
For yesterday, when I was young
Copyright © 1969, Hampshire House Publishing. Original French Lyric and Music by Charles Aznavour. English Lyric by Herbert Kretzmer (somewhat adapted here by Lena Horne)

Photos: The photo of the young Lena Horne is a classic by John Rawlings, which appeared in the April 1, 1994 of Vogue magazine, and the painting is by Merryl Jaye, who has a wonderful collection of jazz portraits at her website.

Posted by Lorenzo — Alchemist's Pillow at 10:40 AM