This week's Theme Thursday is "Surface". See the link further below for more participants.

When is a surface not a surface? ... When Renaissance inspiration converts it into a spectral interface between painting and architecture, dissolves a ceiling into thin air, balloons a flat fresco into a celestial nave. 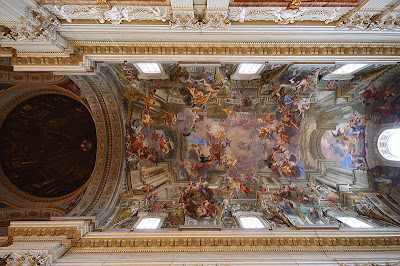 There is a church in Rome, the Chiesa di Sant'Ignazio di Loyola a Campo Marzio (Church of Saint Ignatius of Loyola at Campus Martius), which tends to be overlooked by most visitors and sightseers. This is understandable enough, given the many marvels offered by the Eternal City. I happened to stroll into Sant'Ignazio late one afternoon, on my way from the Fontana di Trevi to the nearby Pantheon, both of which are certainly on everyone's must-see sites.

And there, quite unexpectedly, I beheld a wondrous illusion created by the painter Andrea Pozzo in the late 1600s applying the perspectival insights, techniques and discoveries pioneered years earlier by Brunelleschi and other Renaissance giants. Pozzo painted a huge fresco (diameter of 17 meters) on the nave ceiling depicting the apotheosis of Saint Ignatius of Loyola. As a painting it will not rival the Sistine Chapel as a masterwork, but the effect it creates is outstanding.

There is a red circle on the floor marking the ideal vantage point for experiencing the full illusion. When you first enter the church and see the enormous fresco, the images are flat and somewhat distorted, but as you approach the red disk everything rises and rounds into place, the columns stand up, the angels and other figures float upward and the sky seems to soar endlessly away, the surface magically dissolved.

The embedded video below explains and captures some of the illusion, better than the photos do:

Along with everyone else in the church at that time, I spent a good while shuffling back and forth, trying not to bump into the others as we gazed upward, converging on and then stepping back from the spot from where the last vanishing point of all vanishing points vanished, spellbound by the eerie rise and fall of the columns, the angels alternately ballooning and deflating and the sky opening and closing to the heavens. Another even more curious video might well have been a view from the ceiling of the gawking tourist, all eyes fixed upwards, as we moved to and fro in fascinated rings around the visual magnet on the floor.

So if you have never been there, I recommend a visit to Chiesa di Sant'Ignazio next time you are in Rome. It won't take long and it is easy to sandwich in between the weightier wonders of that magnificent city. And no matter how compelling the illusion may seem, remember ... you'll only be scratching the surface.

Click here to see what other assuredly more inspired TT participants have had to say on this week's theme.
Posted by Lorenzo — Alchemist's Pillow at 1:42 AM