Silence of the universe ... 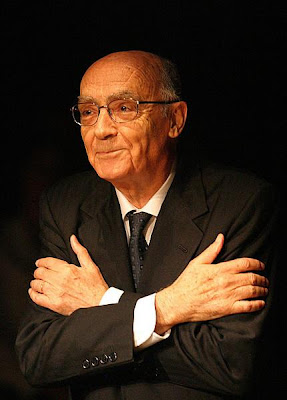 
The mortal remains of José Saramago were cremated this weekend, with part of the ashes to be spread at his birthplace in Azinhaga, Portugal, as well as in Lanzarote, Spain, his home for much of the last two decades. The geographic, historical and linguistic affinities between the two Iberian neighbors helped make Saramago a very celebrated and beloved figure here in Spain.
His works are not as widely read in the English-speaking world. I can think of no better introduction to José Saramago and his world than the talk he delivered on December 7, 1998 when he was honored with the Nobel Prize for Literature. Below I am inserting the first paragraph of the Nobel lecture, entitled How Characters Became the Masters and the Author Their Apprentice, followed by a link to the Nobel Prize organization website where you can read the rest.
In this extraordinary passage he evokes the memory of the person he describes as the wisest man he ever met, an illiterate swineherd and storyteller, his grandfather, a man so enamored of the beauty of this world, that when he felt death approaching, he went out to say goodbye to the trees in his yard, "one by one, embracing them and crying because he knew he wouldn't see them again".

From this evocative climb up his genealogical tree, Saramago goes on to gently shake out the leading characters of his works to describe how much he learned from them. In the rest of the Nobel lecture, he gives a moving tribute to those characters, the masters who apprenticed him, and concludes by saying that he only "wished to be the echo of the conjoined voices of my characters. I don't have, as it were, more voice than the voices they had. Forgive me if what has seemed little to you, to me is all".
Hopefully this will provide a glimpse of what made so many millions cherish José Saramago for his imagination, warmth, humor, irony and compassion. To see the rest of his Nobel lecture, click here. The English translation is by Tim Crosfield and Fernando Rodrigues (©THE NOBEL FOUNDATION 1998).
Adeus, maestro. Obrigadinho.

Posted by Lorenzo — Alchemist's Pillow at 9:51 AM