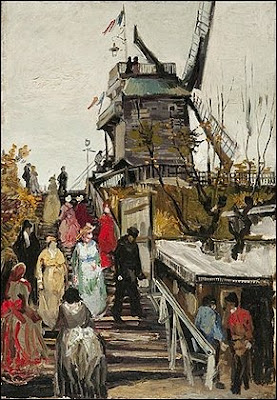 Just today, the painting "Le Blute-Fin Mill" (shown to the left) has gone on public display for the first time after being attributed to Vincent van Gogh. It is being shown at the Museum de Fundatie in the Zwolle, Netherlands. According to an Associated Press article, this is "the first Van Gogh to be authenticated since 1995 and the sixth to be added to the confirmed list of the artist's paintings since the latest edition of the standard catalog was published in 1970". (AP Photo/Museum de Fundatie, Zwolle)
Art curator Dirk Hannema bought the unknown painting in 1975 for a relatively minor sum from an art and antiques collector who did not believe it of much value. Hannema, however, was convinced that it was a Van Gogh and so told the art world, who did not place much stock in his claims, recalling how an earlier painting he touted as a Vermeer had been shown to be a forgery.


Now, more than 25 years after Dirk Hannema's death, the work has been authenticated by experts at the Van Gogh Museum in Amsterdam as having been painted by the Dutch impressionist master in 1886.
Posted by Lorenzo — Alchemist's Pillow at 8:38 PM