hooves churning foamed sand
the sea pulls away from shore
gulls cry songs of salt
The photo is from a horse race I saw this August on the beach in Sanlúcar de Barrameda, where the Guadalquivir river flows into the Atlantic. Sanlúcar is a delightful town in the Andalusian province of Cádiz, in southern Spain. In addition to these waterfront competitions that it has been hosting for nearly 180 years, the town is famed for its wonderful manzanilla (the delicate local variety of the pale dry fino sherry), stately mansions and great cuisine, highlighted by perhaps the best prawns your teeth and taste buds could ever tuck into. I was able to sample generous helpings of all of these on a brief but rewarding visit this summer while getting acquainted with the ancient city of Cádiz and its surrounds. 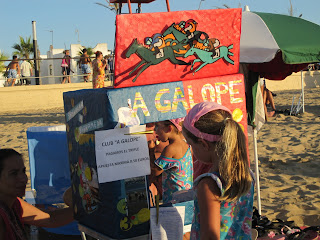 Where horses race, gamblers follow. One tradition associated with these races is to have children organize and run betting stands for other children. Yes, that is how we encourage the entrepreneurial spirit amongst the young here in Spain. These two sisters are taking bets on the next race. When is the last time you saw a bookie with a lollipop?

Let's leave Sanlúcar and head off to the provincial capital, Cádiz, founded by the Phoenicians around 3000 years ago, making it the oldest continuously lived in city on the Iberian peninsula and probably all of southwestern Europe. The old quarters stand on a narrow peninsula jutting out into the sea, so there are fabulous views of the ocean and the bay from all over the city. The sky, sea and sun-ripened horizon seemingly permeate everything in and about the city, its whitewashed homes, art, music, food, the laughter of its residents. The light and the air it inhabits seem different in Cádiz than anywhere else, tinged gold and silver, depending on the time of day and slant of eyes and mood, scented with sea salt or jasmine, depending on the season and direction of the wind. I can think of no better place to become schooled and wise in the ways and nuances of sea breezes. Sailing is key to the city’s history and sails and zephyrs waft constantly through the popular imagination, speech and songs of its people. Indeed, Columbus set out for the New World just around 60 miles northwest from here, and the city had its golden age in the 18th century when the Guadalquivir river passage to Sevilla silted up and Cádiz inherited the Andalusian capital’s place as main port for trade with the Americas. 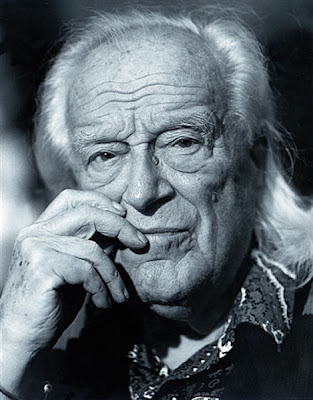 One of the best known gaditanos, as the people of Cádiz are known, is the poet Rafael Alberti, born just across the bay in El Puerto de Santa María in 1902. At the time of his death on 28 October 1999, Alberti had become the last surviving member of the group of poets known as the “Generation of ‘27”, which included Federico García Lorca, Jorge Guillén, Vicente Aleixandre, Luis Cernuda, along with fellow travelers painter Salvador Dalí, filmmaker Luis Buñuel, poet Miguel Hernandéz and, farther afield, Chile’s Pablo Neruda and Argentina´s Jorge Luis Borges. Rafael Alberti fled the country in 1939, driven out by Franco’s victory in the Civil War, and spent nearly four decades in exile in Argentina, Paris and Rome before returning to Spain in 1977 after the dictator’s death.

Below you will find an Alberti poem about a wayward dove, Se equivocó la paloma, side-by-side with an English translation. As you will see, it is one of his simpler poems; but simple does not mean easily translatable, as you will also find. Its gentle musicality is nearly impossible to render in English.
﻿ ﻿
﻿﻿
﻿﻿ ﻿﻿﻿

As an added treat, you get to hear Rafael Alberti himself reciting it. The poem has been set to music by Carlos Guastavino and the singer Rosa León chimes in movingly at the end. I encourage you to reread the poem, while listening to Alberti’s warm burnished recital.
﻿
﻿And for an even more musical treatment, I am embedding below a version of the song by the much loved singer and songwriter Mercédes Sosa, la Negra, the "voice of the voiceless", whose own voice sadly left us just over a year ago now.


In closing, I will post links to two other moving versions of the poem-song, which I would embed here but do not wish to abuse your patience. For a more ‘classical’ treatment click here for a stirring rendition by tenor Martias Mariani, with Valerie MacPhail on piano, accompanied by a sumptuous slideshow. And for my personal favorite, you can find here the audio of a powerful rendering of Alberti’s serendipitous dove by one of the great flamenco voices of our time, Carmen Linares. I suggest you open Carmen's audio in a separate page by pressing the Ctrl key while clicking on the link, starting the audio and then reading the poem again.
Posted by Lorenzo — Alchemist's Pillow at 5:56 PM