This weekend the trails in El Griego (see past post on my sierra hideaway) that I normally hike and mountain bike on were given over to a different type of trek. It is fiesta time in the sierra, and in this part of Spain fiesta means encierros, the running of bulls through the windy road and streets of the nearby mountain town of Ayna.

Here is a panoramic view of Ayna on a normal non-fiesta summer day ...


On September 1, the bulls leave the grange where they have been bred as toros de lidia, fighting bulls, and travel on foot to Ayna in the company of mansos or cabestros, as the tamer steer or bullocks are known. On the fourth and last day of the trek, and next to last day of their life, they pass through El Griego, a stone's throw or cicada's chant from my house.


I much prefer the privilege of walking in the company of these noble creatures through these hills and woods than participating in the frenzied harassment that tends to happen when they are run through the town.

The next day, the town of Ayna bustles with activity and excitement as people pick out their preferred craggy perches for viewing, and not running in, the dash down the mountain road and into town... 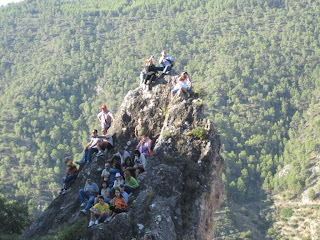 The mansos trot down a few minutes later to herd the recalcitrant bull toward the plaza, where he will be locked up until the afternoon bullfight.
The worst thing that can happen in these encierros is when the bull turns around and decides to run back uphill into the swarms of people... 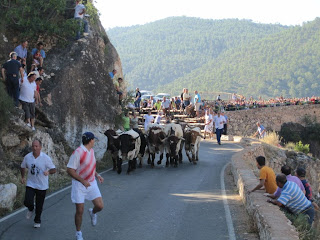 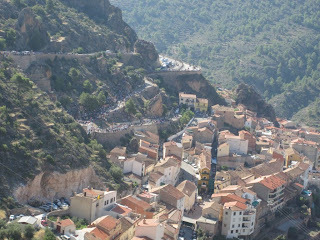 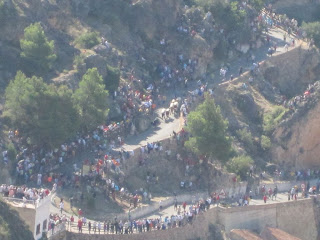 I'll close by introducing you to Miguel Hernández. I say 'introduce' somewhat hesitantly, and perhaps wrongly (he may be familiar to you); but though one of the country's major 20th century poets, he is not as well known outside of Spain as are his contemporaries, Federico García Lorca and Antonio Machado. Like them he was a victim of the Spanish civil war. Born in 1910 to a humble peasant family, Miguel Hernández was a poor and relatively uneducated goatherd and self-taught poet. The story of the obstacles he overcame to pursue his passion and talent for versifying his love of nature is exceptionally moving. And his distressing death perhaps exemplifies like no other the hideous tragedy of that war. This unique poet died in prison in 1942; his death sentence for past support for the Spanish Republic and anti-fascist activities had been commuted to 30 years in prison, but the horrid prison conditions and malign neglect led to his death of tuberculosis at the age of 31. 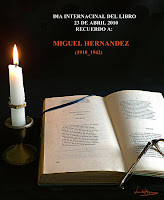 This year marks the 100th anniversary of his birth on October 30, 1910. I will try to post more on him and his poems over the next few weeks. For more information and some of his poems, in English, visit the Poetry Foundation's web pages on Miguel Hernández. There, if you can bear the heartbreak, you may read "Lullaby of the Onion". He wrote that stunning verse not long before his death, upon having learned that his wife Josefina, who was breastfeeding their newborn son at the time, had nothing to eat but bread and onions. For the Spanish originals, one good site is the A Media Voz site.

I'll leave you with his Como el toro, he nacido para el luto — "Like the bull, I was born for doom and pain". First in Spanish and then my humble (and entirely indequate) and very loose translation.