We'll be seeing you around, Barry ...

Yesterday brought the dreaded news that our dear blog friend, Barry Fraser, intrepid explorer of myriad marvels and pains of life, has passed away. Although we all knew this was a harshly real and perhaps imminent possibility, word of Barry's death comes as a shock nonetheless and packs a painful wallop, somewhat softened by the beautiful and courageous way in which his wife, Linda, broke the news on Barry's blog yesterday. Thank you, Linda. The calm and tender bravery of your message, the refusal to give cancer or death dominion, and the forward-looking plans on a simple rite to remember Barry are stirring and ring so true to the spirit he evinced throughout this ordeal.

Some of you have been following Barry's blog, An Explorer's View of Life, since before he was diagnosed with cancer back in March 2009. I first 'met' him in February of this year as part of what quickly grew into a worldwide bell-chiming campaign to celebrate the end of his chemotherapy sessions (for more on that ritual click here). I was very new to blogging at that time (a couple of months) and the experience opened my eyes to how powerful and meaningful blogging could be as a means of developing a caring community of friends. Real friends, not virtual buddies. Genuine and raw feelings, not cyber emotions. The outpouring of affection and support for Barry was stunning and inspiring. Overwhelming was perhaps the word he used most often to describe the effect on him.

And was it all for naught? That is the cruel and vexing question posed by his passing just a few short months later. You may rush to remind me, and rightly so, that the answer is no, that compassion, friendship and generosity are never futile or vain or wasted. But when we hear this grim bell tolling its wretched knell, that uncouth question clangs heavily in the air and clings to our thoughts about our own lives and destinies as well. I would like to find and offer lofty words to beat back that stupid question, but forgive me if for this one sullen moment I merely acknowledge its presence. The bell's peal will fade, I know, and fatten the silence left by many others.

The death of a friend sends us on a punishing and lonely climb up a mountain of memories suddenly heaved up at a crazy angle, crowned by the foreboding ridge of death that overhangs our ascent in its cruel shadow. To mourn is to scale that last vertical bluff before the summit, the toughest part of our journey. But once we manage to reach the crest and turn our pained eyes and hearts away from the cliff face to see the landscape of our friend's life stretch out before us, our fatigue is lightened and we know the painful climb was necessary to bring the fullness of vision only won atop such summits.

So what can we see in the landscape of Barry's life? What do I see in the blogscape he has left us? I see a tender, warm-hearted and friendly storyteller, graced with wit, a probing curiosity, a gentle self-deprecating humor and a generous heart. Whether teaming up with Linda to share a bit of lore about his local community on their Friday My Home Town Shoot Out blog, or narrating family history or recalling his grandfather on a Sepia Saturday, he was always a fascinating raconteur. Although the ravages of the disease took a brutal toll on his body, he had the game spirit to keep on blogging nearly every day. And his writing was almost always upbeat, with a striking absence of morosity, self-pity or bewailing his fate. While many of us will whine about writer's block or the frustrations and rigors of getting published or how harried work and home lives leave little time or peace of mind for writing, he just kept writing to share his thoughts with his blog friends. 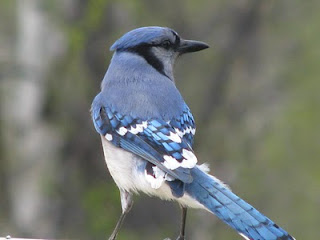 On some days his blog completely ignored the disease. One fine example was the delight he could take in an unexpected moment shared with some blue jays on his back deck. A simple epiphany of sorts. And when he did discuss the worsening developments on the medical front, he was able to coax a laugh out of dire situations that would simply crush less hardy spirits, like finding humor in the semantic nuances of "palliative care" or drolly boasting that he had become a veritable industry when describing the entire community of doctors, nurses, and caregivers assembled around him just to keep him going. How fitting it seems that he began his very last post, written just four days before he stopped breathing, by saying "Today I flew" in a joking reference to the hoist used at the hospital to get him into his new wheel chair.

Rumi wrote that the dead grieve not for their deaths, but for the way they lived. I do not know what griefs or grievances Barry may have taken with him. I trust they are few and light to bear, that they will not burden his flight. He is a man who has brought much love and light to his family and friends and to our blog community, where he will be dearly missed. We have been fortunate to bear witness to a life well lived, to have been fellow travellers on some of his explorations.


Barry, I'd like to think that you are still exploring ... just up the road a piece, a road that all of us will travel. Your beloved dog Lindsay will scamper up the trail after you. The rest of us will dawdle and linger a while longer on the path, so excuse us if we take our own sweet time before joining you. It is not that we don't miss you, it's just that we are so enjoying our journey here, in large part because it has been made ever richer by the likes of you.

Posted by Lorenzo — Alchemist's Pillow at 2:51 AM