For the audio to this post, before reading click on play below to listen to Ishmael by the great South African jazz pianist Dollar Brand (aka Abdullah Ibrahim).

This week's Theme Thursday subject is 'Breakfast'. By now I am several days late, but still want to break bread with you here and share this my most memorable breakfast memory, not an early morning sitdown affair at the kitchen table, but an unerasable moment I enjoyed late last August, high atop the Galata Tower as I gazed out over the Istanbul skyline at sunset on Friday during Ramadan, the Muslim holy month.

This came on the last of my seven nights in Istanbul. On each of the previous nights I had made a point of ceremoniously going up on the hotel's rooftop terrace just before sundown to see the spectacle of the mosques lighting up and hear the muezzins chanting out their adhan, the call to prayer, from the minarets. Our hotel was well situated for this observance, right next to the Shezade (Prince's) Mosque and a short distance from the Suleymaniye the Magnificent Mosque and the Beyazit Mosque, with the marvelous six-minaret Sultanahmet Blue Mosque and the Fatih Mosque a bit farther away but within clear view.


And within earshot. There is something mysterious in the way the plaintive call of the muezzin seems to spiral up from the clarinet sentries that stand by the silent drums of all those temples and then float over the rooftops of this time hallowed city. I would try to pick up each mosque's chanting muezzin and follow their individual calls separately until they melded and flowed into each other so completely that it was impossible to hear anything but a single reverential voice crying out from the multi-throated choir.

During Ramadan the sunset call to prayer is the most welcome for the faithful, as it marks the end of their daylong dawn-to-dusk fast. Those who strictly adhere to the fasting ritual will not even drink water while the sun is up, a parching challenge when the holy month falls in the months of summer heat as it did this past year. So the muezzin's evening wail bears a cool quenching promise of imminent release from heat, thirst and hunger that seems to make it ring clearer and carry farther in the dusky red horizon. 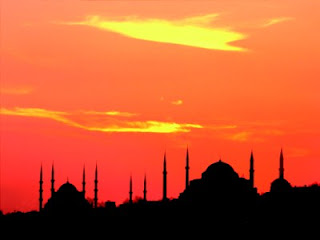 Istanbul is a city of mosque minarets as surely as New York is the city of skyscrapers. I will never forget the gorgeous skyline that greeted María and I some 20 years ago during our first stay in the city, as we silently feasted our eyes on the countless dark mounds and delicate spires silhouetted against the fading glow of the setting sun on our return to Istanbul by boat on the Bosphorus Strait after a daytrip up to the Black Sea.

I had long been drawn to the sound of the muezzin's chant, for reasons I do not know. Perhaps it was the tug of my eclipsed Arab ancestry — although both my grandparents on my father’s side were from Lebanon/Syria, this part of my family history is almost completely unknown to me. Or maybe it was simply the exotic allure that distant desert songs can exert on a fanciful boy who grew up in New Jersey in the shadows of New York City’s soaring towers. For whatever reason, for me there is a mesmerizing quality to the throbbing plangent cry. Even before I had actually heard the mournful minaret call I felt I had recognized it in the stirring laments of Coltrane’s soprano saxophone or Yusuf Lateef’s eerie soulful oboe and certainly in the powerful hoarse seguiriyas sung by Spain’s best flamenco singers.

But when I did first hear a muezzin summon the faithful on a trip to Morocco many years ago, it felt completely new and strange. There was a nasal vibrato that I had not expected, as if the guttural emotion welling out of the muezzin’s windpipe could not all pour out through the mouth and had to trill its way out through the pinched upper reaches beyond the pharynx. To me it conjured up the bleated song of lambs or a flock of goatskin bagpipes crying out or images of a giant one-stringed lute humming mightily. Again and again, the reedy chant rises up in long and longing ululations and then falls back into silence. But there is no silence when several muezzins from different mosques are heard at once, and the effect is even more striking, the lilting chorus surging and ebbing, never resting…

Perhaps the best view of Istanbul is afforded by the observation deck of Galata Kulesi, the 220 foot high cone-capped cylinder that since 1348 has towered above the northern bank of the Golden Horn inlet that divides the city. I assumed it would be impossibly clogged with jostling sightseers at sunset, the most prized viewing hour, so I did not entertain much hope of being able to earn a spot there when I headed across the Galata bridge shortly before sundown. But, inexplicably, to my great and delighted surprise, there were no lines and I was able to quickly make my way to the top as the sun was about to end its slow daily descent.

So my break fast tableau was set, the majestic Constantinople-Istanbul stretched out before me, with her scores of historic mosques. And as the sun dipped below the horizon, the phantom minarets began to put on their show, lighting up, one after another, like the brightest stars do at nightfall. Suleymaniye, Sultanamet, Eyup, Fatih, Yeni Cami, Shezade, Beyazit, Rüstem Pasha … and, also one by one, the muezzins took their solar cue and in quick succession began their twilight incantations. The evening air was soon warbling with disembodied prayers wafting up from dozens of minaret candlesticks. And they were all converging on Galata Tower, they were all singing for me.

One by one the voices trailed off into the dusk, their summons ended, the choir thinning out until only one last night crier was heard. And just as it is impossible to pinpoint the exact moment when the fading golden peal of a vibrating gong ends and the ensuing silence begins, I cannot tell when the last muezzin fell silent on that crimson evening. It was break fast time.

I was recently reminded by Susan’s Through the Looking Glass series at ArtSpark Theatre of the passage where the White Queen tells Alice that “sometimes I've believed as many as six impossible things before breakfast". And in that spirit, I offer here six impossible beliefs to utter atop Galata Tower as I try to relive that evening before break fast:

♫ The story told on one of the panels on the Galata observation deck is true: in 1638 one Hezârfen Ahmed Çelebi did fly from the top of the tower on a glider he built himself and landed unhurt on the Asian side of the Bosphorus over two miles away.

♫ No call to hatred or subjugation will ever be heard in the muezzin’s adhan, neither by the callers, nor by the heedful called, nor by unheeding wayfarers who gratefully eavesdrop on this sublime choir.


♫ The stalagmite minaret lighthouses will fuse their glow with the stalactites of starlight dripping from the indigo sky to light our path out of the labyrinth.

♫ The muses locked in the mosaic tiles of all the mosques will stir anew amidst hyacinths and carnations, tulips and peonies, and we shall know their song.

♫ The endless succession of dawns and dusks washed away by the currents and eddies of the Bosphorus and Golden Horn as they lap at the pylons of history will rise up from the silt and percolate their secrets out through those choppy waters.

♫ We will all sit together to break fast, quench thirst, slake hunger and sate revivified senses while our eyes drink the blue ocean and our hearts eat the sun like a fruit (to paraphrase the lovely Genevieve Taggard poem known to me thanks to blog friend Joanny the Dowser’s Daughter).

To hear an adhan call to prayer listen to the video below, along with images of some of Istanbul’s mosques. To get the idea of what I have tried to convey in this post, you must imagine several of these intoned simultaneously from all different directions: 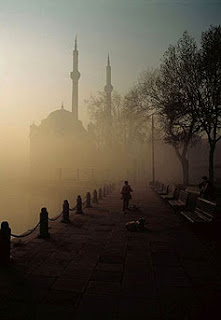 Enjoy breaking fasts and breakfasts with other Theme Thursday participants by clicking here.