The great Billie Holiday was born 95 years ago today, on April 7th 1915. In my personal pantheon, there has never been a greater singer in sheer capacity to transfix and move the listener. Much beloved by her fellow musicians, her own musicianship was of the highest order and her raconteurship emotionally riveting. The jewels she hewed from the mountains of despair that formed the landscape of her life still radiate light today.

For some reason, I cannot look at the moon without seeing Lady Day's face. I do not remember when or why this began and only know that this is so and has been for practically all of my adult life.

Many years ago when I saw filmed images of Billie Holiday for the first time I was struck by how graceful, composed and relaxed she seemed when she sang. Before that I had relied on album cover photos and my imagination as to how she must have looked while performing. Given the tremendous emotional force of her records, I guess I had conjured up writhing images of a contorted, grimacing face, eyes closed tight, head thrown back, mouth locked in the siren's rictus. This was before I had learned that valuable lesson enunciated by Sarah Vaughan when she said that the great artists always seem to be holding something back.

But in this performance, Billie Holiday just seemed to be sitting on a bar stool, cool, calm and naturally, jes talkin' atcha. I was struck by the realization that everything I had heard on all those vinyls was just her way of talking. But, oh, the things she had to say ...

I embed that famous clip below, taken from 'The Sounds of Jazz' TV show which first aired in December 1957, with an incredible lineup of jazz greats accompanying her on Fine and Mellow, one of the few songs Billie Holiday wrote herself. The recording was made around a year and a half before she died. Her voice was not at its finest, but yet this is considered by many to be the finest piece of jazz ever recorded.  One of the tenor sax players on the date was Lester Young, with whom she had been, for many years, especially "close". He was the man who christened her 'Lady Day' and she was the first to call him 'Prez', the nicknames by which they came to be known by their fellow musicians and for posterity.

For me, and many others, the highlight is the expression on Lady Day's face as Lester Young begins to blow his gently simmering blues, the way she nods and shakes her head as the Prez hits that sweet spot. Take a look and listen (Lester Young's solo is the second one, after Ben Webster's) ...

white gardenias sway
under a mesmeric moon
so fine and mellow 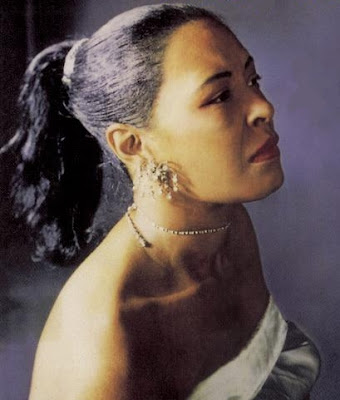